How To Stop Your New Hire Feeling Awkward 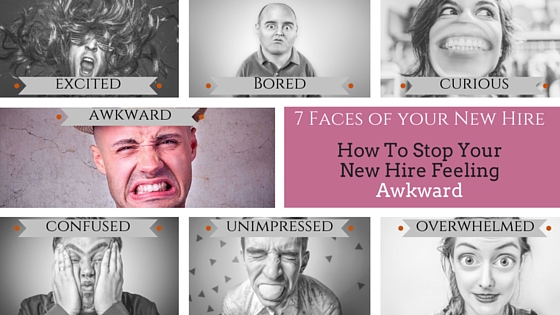 You know when you are at a party and you don’t know anyone else there?  You kind of hover on the outskirts of a group with a gormless smile on your face.  Pretending you understand all the in jokes and banter?

Or maybe, after a couple of awkward attempts at getting to know people, you stand in the corner on your own.  Looking busy on your phone.  You know people think you are probably being ‘stand offish’ but it’s the least painful option until it is time to go home.

It is not a great feeling, right?

It can feel exactly the same when you start a new job.

In the second part of the ‘7 Faces of Your New Hire’ series, I look at how to make your new hire feel less awkward in those first few critical weeks.

It sounds so simple.  And it should be.

But it still happens.  And I believe that is because too many assumptions are made.

‘He seems a chatty kind of guy.  He will get to know people’

‘He’ll figure out how things work around here soon enough’

But it doesn’t always happen like that, does it?  Not without a little help at least.

Just like a good party host, you need to actively find ways to make the new person feel welcome.  To reduce that feeling of awkwardness in a place he is not familiar with, surrounded by people he doesn’t know.

The Three Reasons He Is Looking Awkward

There are three main reasons your new hire has that uncomfortable, ‘rather be anywhere else’ look on his face.

Let’s dive into all three and see how you can avoid them happening.

He Doesn’t Know Anyone

Our new hire, let’s call him Jack, turns up on his first day.  As he is shown to his new desk, his manager points at people and throws out names that he, of course, promptly forgets.   He then sits at his desk until his manager finishes his next meeting, trying to make eye contact with his office mates.

Let’s say Jack’s day gets better.  He does meet up with his colleagues for lunch on day one.  That’s great, and, without doubt, a first day essential.

But for the rest of the week, he finds himself eating at his desk on his own because everyone disappears off to lunch in pairs and he is not included.

Or maybe he is sitting alone in the lunch area.  There might be a nod and a quick hi but there is no one to do the introductions and it is just AWKWARD.

Do you remember that day you fell out with your mates at school and had to sit on your own with your packed lunch and everyone stared?

People Don’t Know Who He Is

Jack looks up to see a lady approaching his desk.  The lady, with a firm handshake and a big smile, welcomes Jack by name.  She introduces herself, helps Jack understand how they will work together and lets him know where to find her if he needs anything.

Jack looks up to see three people huddled together while throwing questioning glances in his direction.  He works out that they are just trying to figure out who he is.

You may be reading this and thinking ‘well, he should have the nerve to introduce himself.’  But not everyone is made that way.  Some people will proactively do just that.  But they shouldn’t have to do that with everyone, should they?

There is a five minute solution to this.

He Doesn’t Know How Things Work Around Here

It’s not just the job you have to figure out, it is everything around it.  And these small things can take so much energy and effort away from actually getting up to speed on the job.  And to keep asking questions, about what you feel is small, stupid stuff can be embarrassing.

Now, a lot of companies already do the ‘buddy’ thing.  But make sure you are not making assumptions here either.  Does your buddy know what he needs to do?  This relationship works really well if it is more proactive than reactive.  Sure, as a new hire, it is great to have someone to go to answer questions.  But what if that person wanders over to your desk once a day, or drops you a quick skype message to check you are doing ok.  That is pretty powerful.

(More ideas about the ‘buddy’ role will be included in the Onboarding checklist that is published at the end of this series.  Don’t want to miss it? Click here if you would like it sent directly to you)

Turn Your Best Intentions Into Actions

Starting a new job scores pretty high on the vulnerability scale.  Jack has come from a job where he knew everybody, he could do his job and he didn’t have to do three laps around the building to find the right meeting room.

Feeling vulnerable can spike lots of other emotions. The new and unknown can make even the most confident person feel awkward at times.

By anticipating your new hire will feel this way means that you can actively reduce those levels of discomfort.

I have no doubt you want your new hire to feel welcome and supported.  But intentions have to be followed by actions to make a difference.

This is part two of the series.  If you missed part one -what to do when your new hire is unimpressed – you can read it here

Don’t want to miss any of the series?  Sign up here and you’ll get them in your inbox as soon as they are published.  You will also get the checklist for an onboarding experience that will make your new hires look like they have just won the lottery!

Here’s what else is coming up in the series