Hiring from Outside your Industry? 7 Tips to Make Them Successful Fast 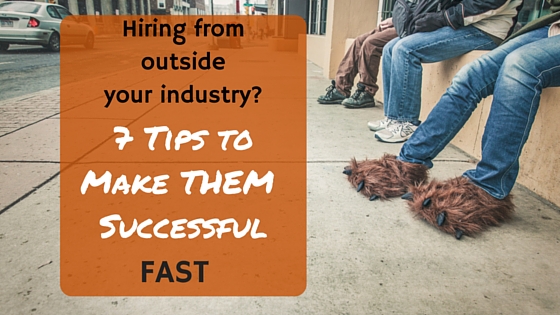 I had no idea what he was talking about.   I could see his lips moving.  I could hear the words.  Beyond that?  Nothing.   He was talking Cloud Computing.  I felt like I was an alien that had just landed on an uncomfortably different planet.

Starting a new job is tough.  We all know that.  Starting a new job in a new industry takes it to a whole new level.  There is all the usual ‘newbie’ angst.  But you don’t just have to figure out how things work in this company, but also in this industry. There is a school of thought that we learn by taking a new experience and comparing it to something we have known before.  When there are major differences this can be hard to do.

But as an employer, it is a smart move to recruit from outside your industry.  Industries are being turned on their head and everyone needs to be on their toes.  Who really knows what is going on out there.  The Uber alternative to your industry could be beavering quietly away and you won’t notice until you are possibly just too far behind.

By embedding talent from other industries into your organisation, you are taking big steps forward.  You are bringing in fresh ideas learnt through experience that is different to yours.   Diverse experience in your business is an asset.  After all, innovation doesn’t necessarily need new ideas.  It can build just as well with old ideas used in a completely new context.

What you need to do now is find a way to get these industry outsiders up to speed, fast.

Never has onboarding been so critical.

You focus needs to be on his success.  If he knows you have a plan to get him there, the feelings of discomfort will not impact his progress.  I have been both a new hire and a hiring manager in this situation and here are some of my learnings on how to make it work.

1. Expect it to take longer for him to get up to speed (and tell him this)

You have to be humble when you take on a role in a new industry.  You have to put your hand up and say you don’t understand many more times than you feel comfortable with.

When your new hire does this you need to be ready to support him without judgement.  Because it really takes guts to say you don’t know.  If he is in an environment where he feels he can do it, he will swallow his pride faster.  Don’t force him to waste time scratching around for an answer to avoid asking another question.  Let him get it right first time.

2. Give him a support network

This one is critical.

He needs a friend.  Ideally two or three.  Friends that will patiently guide him through the minefield until he feels like he is stumbling less. People that will do a quick debrief after a meeting to make sure he understood everything that was going on – the politics, procedures as well as the jargon.

If you can, make one of the network someone who was new to this industry when they joined.  They will know exactly what he is experiencing.

I was lucky enough to have three or four people who helped me when I felt like a bumbling, stuttering mess.  It is highly likely I would have quit in the first few weeks without them.

3. Do some internal PR for your new hire

Your colleagues and team members may question why you have bought in someone who doesn’t have ‘relevant’ experience.  Help them understand the benefits this will bring.  Explain why your new hire shone at interview.  And focus on building a culture that welcomes outsiders.

4. Give him an insight into your industry

5. Teach him about your business.

Show him what it is like from every angle.

TIP:  Give him some exposure to industry knowledge first so he can have more valuable conversations with the people he meets

6. Give him some cheat sheets

As new hires come onboard, capture the questions they ask into an FAQ document for the people next in the door.  Trust me – having information that means you don’t have to ask another question can feel like winning the lottery.  This is particularly relevant for the jargon and the acronyms everyone uses.

Assign a task to each new hire to build up this glossary of terminology that they had to question.  It is hard to remember what you are being told when so many words are alien to you.

Do some quick screen capture videos of the systems you use every day.  These don’t have to be fancy.  Just record what someone does when they are updating their timesheets, filling out an expense report or using the CRM.  This is something your new hire can follow when he needs to – and one less thing to remember.

7. Find a way for him to shine – as early as possible

He has come from a job where he knew a lot, to feeling like he knows very little.   Find a way for him to utilise his skills and experience.  Maybe ask him to talk about where he thinks the similarities and differences are, and what your business could learn from his previous industry.  Get him involved in a project or ask him to put fresh eyes on an old problem.   He may take a little longer to be firing on all cylinders but that doesn’t mean he can’t add value along the way.

Remember why you hired him.  Your plan shouldn’t be to morph him to be the same as everyone else.  You are strengthening your team by deepening their experience.

There will be frustrations along the way – both for you and him.  But if you put a plan in place to help your new hire succeed, and you have his back all the way along, those frustrations will be shortlived.  And your business will be the stronger for it.