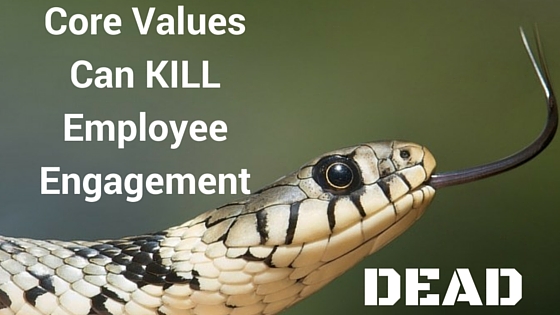 Sarah walks out of a meeting with her customer.  She has worked hard to build that relationship based on trust and honesty.  But she has just had to lie to them, because she had to follow the company line.  She sits back at her desk, and the company core values dance around her screen saver on her laptop.  ‘Integrity’ is the one that leaves a bitter taste in her mouth.

This morning David explained to his long term team member that, despite her difficult situation at home, the company had not been able to grant her request to work a four day week.   Now he sits in a presentation and listens to his boss talk about the company’s focus on Employee Wellbeing.   He curses silently under his breath.

That’s how it feels to work for a company that plays lip service to its core values.

Of course, every organisation has values at the heart of their business.   But publishing those values is telling the world that this is what a company stands by.  And that should not be entered into lightly.

Don’t get me wrong.  A company that is truly driven by clear values can be a truly magnificent beast.

Look at companies that are successful in the eyes of their customers and employees, and have a healthy bottom line.  In a lot of cases you are likely to see a set of values that they hold firm in everything they do.

But to get to that point takes a lot of work, dedication and some really tough decisions.

And most companies think they know this and enter into it with the best intentions.  They have a workshop.  There is brainstorming, flipcharts and whiteboards involved until a list of values appears.

But what about when these executives look at what drives their business and they don’t like what they see?

Let’s be honest.  Publicised core values for many companies will reflect what people want to see rather than what is really there.  After all, as one Senior Executive said to me recently, “what are they going to do?  Put ‘Everyman for himself’ at the top of the list?”

So however the decision is made, a list of values appears.  Marketing budget is spent.  There are new mugs, posters and powerpoint templates to accompany the announcement from the CEO.  HR are asked to add a new section in the Performance Review forms and a new page to the Employee Handbook

And then nothing.  Life goes on just as before.  But the company now has ‘Core Values’.  They can tick that off the list then.

And every time that the management stand up with the values beautifully presented on a powerpoint slide, there is an entire workforce silently screaming ‘have you no idea what it is like to actually work here?’

Do your values reflect where you are or where you want to be?

When I was doing some research on this subject, I came across a brilliant article by Patrick M Lencioni in which he talks about the difference between Aspirational and Core Values.   Core values being the ones that are already ingrained in the culture and aspirational values being those a company needs to succeed but currently lacks.

And, I thought, maybe that is it.

Wouldn’t you be more engaged with an organisation that admitted they were a little adrift from where they wanted to be.  If they were bold enough to say this is what we believe our values should be but we are not seeing evidence that they are.  So we are going to try and get there.

Wouldn’t it feel different to work for an organisation

How different does that feel to a company that puts it values on a poster and feels like they accomplished their goal?

What is the secret to getting it right?

There are several recurring themes from companies that are working hard to get this right.

1. Decide if being a values-driven organisation is right for your business

“If you’re not willing to accept the pain real values incur, don’t bother going to the trouble of formulating a values statement”.  Patrick M Lencioni

Joel Grossman, the COO of Location Labs (who enjoy a 95% employee retention rate) says they  ‘have simply taken the time to think carefully about what they value and prioritized that, openly and honestly, with every move they make’

He uses the word ‘simply’, but that doesn’t mean it’s easy.

Today is March 17th.  For many companies, they are two weeks away from the end of a quarter. The pressure is really on to meet their financial targets.  How much attention are they giving to their core values today?

It is hard to hold tight to those core values when there are so many other competing pressures.

Who is responsible for upholding the values in the business?  Is there anyone that challenges decisions that are being made to ensure these values are being prioritised?  Just as there is someone to review a decision to make sure it makes financial and operational sense, there should be someone to take on the role to assess it against your core values.

2. Phrase your core values to make them true to your business

Don’t just pick words that everyone else uses.  Communication. Respect. Integrity.  Excellence.  Use phrases that are unique and true to your business.  (Oh by the way, they were Enron’s values)

Here are some examples:

Infusionsoft.com:  We check our egos at the door;  We do what we say we’ll do; we face challenges with optimism

Wells Fargo:  Run it like you own it; Take prudent risks;  Only make promises you intend to keep

Build-A-Bear Workshop: Di-bear-sity; Colla-bear-ate;  Cele-bear-ate (well, they’re unique – and I suspect they always will be!)

Core Values that your company will live by shouldn’t be decided in one workshop.  Take time to think about if they are really the right ones. Have you considered them against previous decisions made in the business? Would they have changed decisions you have made before?

4. Be clear on the expected behaviours that bring these values to life

David Mammano, Next Step Publishing articulates well how his company developed the values from phrases to behaviours.

“So, for example, we brainstormed about what “We aim to WOW!” meant in everyday terms; here’s what ended up on the whiteboard: “Be incredible about follow through. Be adamant about closing loops. Close loops while preserving our values and protecting our assets. Go beyond the call of duty. Do that one extra thing that most other people would not do. Write thank you notes. Pay massive attention to detail. Never ask, ‘Is this part of my job?’ Help our community. Be a part of the solution. Deliver great service, branding and tangible results to our advertisers. Actually do what we say we’re going to do. Step up when others are not 100%. Become trusted advisors to our clients. Be vigilant about high standards. Don’t compromise our values.”

5. The values have to be recognisable in the actions of the leadership

Then either don’t bother starting or change the leadership team.

According to Jamie Naughton, Chief of Staff at Zappos

“The best employee is the person who can be the same person at home that they are at work,”

Therefore you have to bring in the right people, who share these values in the first place.

For Location Labs, that meant holding training sessions for hiring managers to define what core values look like in an interview.

“We have one called ‘underdog grit,’ for example,” says Grossman. “What does that look like in a 30-minute conversation? How do you interview for it? It’s a lot of work to make sure everyone understands that.”

7. Use the Onboarding Process to reinforce the values from the start

In his article, Lencioni highlights Intel , whose founder Andy Grove was well known for his ‘willingness to challenge’

“Employees are pushed to embrace the value of risk taking by challenging the status quo and engaging in constructive confrontation. During orientation, for example, new employees are taught the art of verbal jousting without holding on to hard feelings.”

And what about the existing team?

There is always the guy that is a genius.  Who works magic but is really hard to deal with.  He doesn’t share the values and has no intention of adopting them.  And he is normally commended, even though he is the antipathy of what the company apparently holds dear.

According to Paul Yarwood of InsightSoftware.com, in a recent interview with NewHire365, you have to make some tough decisions

“I’ve definitely experienced talented people who’ve not fit these values and been unsuccessful as a result. You simply have to move them on – I don’t care how “good” they are.”

One of the best ways to reinforce behaviours is to showcase where it is being done well.  Recognise how your employees have demonstrated the values and reward them for it.  Create a case study out of it.  Communicate it to the whole workforce to reinforce that value.  Share it during onboarding.

Is it worth it?

Who wouldn’t want to work for a company that had values they stood by.  Imagine looking at a company’s values and thinking yes, that is the type of company I want to work for.  And feeling sure that is what it was going to be like.

But to get to that point takes a lot of effort, belief and guts.  If you are doing it because you think you should, that is probably not going to be enough.

When there is too big a gap between what a company says it stands for and what it actually does, that is when your core values can become a poison running through the business.

Perfection is impossible.  And I can guarantee that companies that are genuinely driven by their values still don’t get it right every time.

I guess that is where a value of ‘being honest with your team’ comes into play.